In August 2018, only three months before the Victorian state election, Labor Premier Daniel Andrews announced what he called “the biggest public transport building program in Australian history” – a new 90km, $50 billion, entirely underground railway line connecting 11 of Melbourne’s existing radial rail lines to form a ring through the suburbs of the city. The justification given by the government and supporters of the project was that Melbourne’s rapid growth means it needs a world-class public transport network – something like London, which Melbourne is projected to match in population by the 2050s. They say it will contribute to Plan Melbourne – the state government’s metropolitan planning strategy for 2050 – by increasing density in the suburbs that have been identified as priority development areas.

The announcement was immediately steeped in controversy when it was revealed days after that Infrastructure Victoria, an agency created by the incumbent Labor government with the objective to remove politics from infrastructure decisions, was not involved in the planning. But the controversy didn’t seem to blunt the immense enthusiasm for the project from the general public – it was widely thought to have played a part in securing Labor’s re-election, with several seats along the planned route flipping to the government.

Since then, a business case has been released in August 2021, and construction began in June 2022. The project, however, has continued to come under fire on several fronts. Notably, no detailed financial plan has been submitted to Infrastructure Australia, which prevents it from assessing whether the project deserves federal funding. The Parliamentary Budget Office provided an estimate, on the request of the Opposition Leader, that the project would cost $125 billion, more than double the initial figure. Some, such as Marion Terrill of the Grattan Institute, questioned the economic case for the project, highlighting that the suburbs the line will pass through only contains 10% of Melbourne’s jobs, and the risk that productivity gains from new infrastructure projects may not materialise given that COVID-19 has transformed patterns of work and travel. Further, even the transport experts who are broadly in favour of expanding infrastructure connecting the suburbs have questioned why heavy rail was chosen over less costly modes such as orbital bus lines or light rail, which could also run at higher frequencies and smaller capacities. RMIT’s Center for Urban Research director Jane Dodson believes such a project should undergo years of analysis, discussion and consultation, none of which has happened. In fact, the project was downsized specifically to avoid this – initial plans called for an entire network of interconnected lines, for which construction could not reasonably start until 2026.

The controversy has come to a head with another state election fast approaching, as the Opposition puts their foot down to say that it will shelve the project if elected, arguing the budget could be better spent to fix the state’s health system.

Time is now running out to figure it out – does the Suburban Rail Loop make sense or not?

According to Suburban Rail Loop Authority CEO Frankie Carrol, the infrastructure project will deliver $60 billion in economic, social, and environmental benefits to the state, suggesting it addresses every aspect of the triple bottom line model. As a sustainability framework, this model ensures that a business achieves well-rounded success in 3 key areas: profit, people, and the planet. From an economic standpoint, the Labor party argues that the project is beneficial, as it can catalyze investment, development, and new business opportunities in the suburbs via the provision of a supposedly efficient transport system, paving the path for Melbourne’s growth in the future. Overall, proponents argue that the project will generate between $1.10 and $1.70 for every dollar invested, boosting growth trajectories and employment, and benefitting the broader Victorian macroeconomy. Although this may seem ideal, Liberal leader Matthew Guy argues that the cost of investment is not worth the return, especially considering growing government debt, skill shortages, and increased material costs that are making infrastructure projects more expensive.

From a social perspective, the Labor party argues that the project will increase equity by connecting suburbs to existing hubs and centres, allowing better access for those who do not live in the city. This increased efficiency in commuting also aims to reduce road congestion by around 600,000 daily car trips when the project successfully disincentivizes people from using private vehicles. Increased equity in job opportunities is also highlighted by the Labor party, claiming that the number of jobs in Suburban Rail Loop precincts (1.6km radius around each of the train stations) will match that of the Central Business District (CBD) by the 2050s, justifying their support for the project. Arguments against this have mostly been made on the grounds of necessity, considering the changing work and travel dynamics brought about by the COVID-19 pandemic. Instead, the Liberal party argues that funds should be prioritised and allocated to improve the underfunded and battered public healthcare system.

Aside from taking note of economic and social aspects, the Suburban Rail Loop Authority is also currently holding investigations and studies to assess the environmental effects of this project. Based on the Environment Effects Statement (EES), the trains that will operate on this new rail line will use next-generation energy-efficient technology. Moreover, considering private transport is one of the world’s major sources of greenhouse gasses, the potential reduction in transportation footprint due to the possible shift to public transport following the project’s completion can significantly benefit the environment. Despite this, concerns are raised in terms of the project’s potential effects on surrounding biodiversity and arboriculture, although the EES claims to be mindful of this.

All considerations regarding the triple bottom line model are factors that must be accounted for in any modern city. Given that other urban centres have some form of a loop in place, comparisons can shed light on the potential impact of the proposed infrastructure project.

One city with such a rail loop already in place is Vancouver, Canada. Both cities consist of Western-educated residents, grid-like car-friendly streets, urban centres surrounded by suburbs, and significant levels of projected growth. While some discrepancies exist in terms of size, population density, and railway lengths, these can be somewhat mitigated by limiting considerations to Melbourne’s middle-ring suburbs, which the suburban railway loop falls under. Note that the statistics below consider the Greater Melbourne area including V-Line services (without the limitation to middle-ring suburbs), and additionally do not cover stations along Vancouver’s West Coast Express.

Melbourne’s metro service consists of 222 train stations across 998km of railway track. There are 15 railway lines. Visually, one can see that none of these lines offers connections to a separate line unless both are following the same track through the same stations. Similar to the American model, Melbourne’s heavy rail transportation network exists solely to transport commuters into the city, relying on trams or buses for transportation across suburbs. 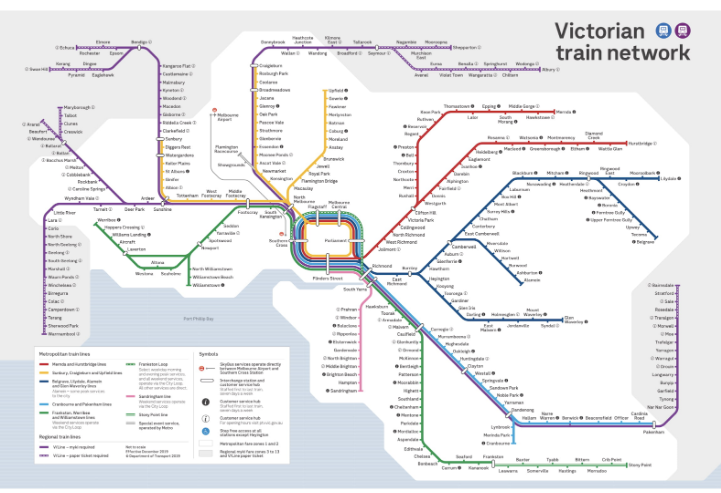 Vancouver’s metro service consists of 90 stations across 148km of railway length, not including the West Coast express. In comparison to Melbourne’s railway network, Vancouver’s railway network consists of railway lines which often have some form of intersection with one another, if not several other lines. This eases inter-suburb transportation from one adjacent area to another, rather than only transporting residents from their outer suburbs into the CBD. This presumably increases transportation capacity and consistency across suburbs, with heavy rail not subject to traffic congestion like other modes of public transport. 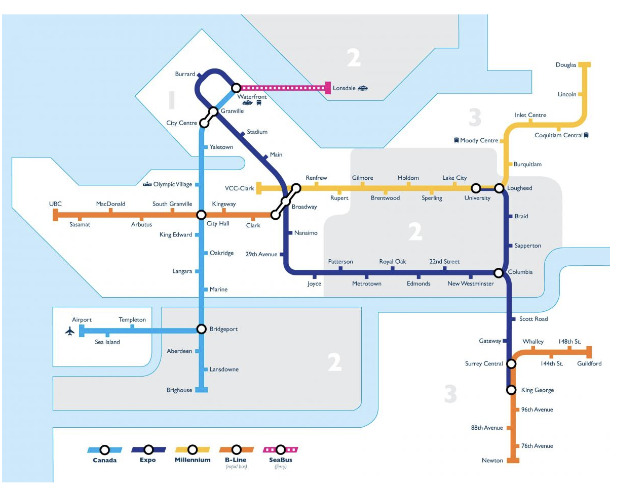 The results of this can be seen in the statistics. Despite a population half that of Melbourne’s, Vancouver transports 475,000 commuters each day; 25,000 more than Metro Trains services. In 2013, only 9% of trips made in Melbourne were by rail, with 57% of those trips used to get to and from the CBD. By contrast, 23% of overall trips made in Vancouver were by rail in 2011. The increased options of transport between suburbs make public transport more attractive to travellers in Vancouver, while in Melbourne it is used primarily as transport to places of work in the city. The proposed railway loop, by creating a somewhat similar structure to Vancouver, could result in increased usage of the railway network. It would capture individuals currently commuting by private vehicle between suburbs and would concentrate traffic around urban hubs as currently planned by the Department of Infrastructure.

As Melbourne grows, its underlying infrastructure must grow alongside it. Labor’s plan may help address issues caused by population growth, but its unnecessary secrecy regarding funding, projections and alternatives cast the project in a negative light. While the focus has heavily centered around the economic return, the project’s popularity points to the addressing of needs beyond the financial. The railway itself also seeks to address a lack of inter-suburban transport, bringing Melbourne’s metro up to the standard of other Western railway networks. In the end, the Suburban Railway plan highlights the needs of an expanding city like Melbourne, and some form of additional public transport infrastructure- whether it be the Suburban Railway or not- must be constructed.

The Changing Business of Music

I am a second year Bachelor of Commerce student, majoring in Economics and Finance. I am most interested in public policy, global trade, and the domestic and international politics that shape these areas. Hailing from the exotic locale of Brisbane, Melbourne has grown on me but the weather leaves a lot to be desired.

As a first year Bachelor of Commerce student hoping to major in Economics and Finance, I’m mostly interested in Development Economics and Macroeconomic Policy. I particularly love to explore topics and issues that revolve around poverty and inequality.

I am a second year Bachelor of Arts student majoring in English and Economics. When I’m not deep diving into the structure of the education sector or the way the share market works, you’re likely to find me on top of a mountain peak somewhere else in Victoria.